Only three miles & it’s on a lift! – Bradenton, FL 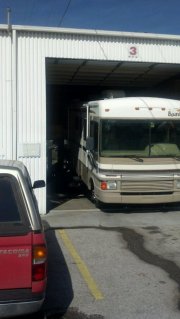 Even though we purchased the RV “as-is”, Rick offered to have the dealership pay for half of the jack repair since he wished he had checked the back and not only the front jacks. The spring that was removed was the wrong one and covered up the original spring that was broken and still firmly attached. There’s no way the dealer could have caught this during the inspection, so I was really happy they helped us out so much, so soon and covered half the cost. The RV Shop had to put the Bounder on a lift to completely remove the rear jack assembly so they could remove the original spring stub. While I was at the RV shop, Alice was stuck at the mattress store and the salesman got to hear about some of this crazy story I’ve gotten us into!

This site uses Akismet to reduce spam. Learn how your comment data is processed.

Spinach, Giardiniera and a tiny bit of pepperoni...
Chicago Chamber of Commerce should hire this guy, knows all the best places!
the saga resumes, Turkey enchiladas, fricassee, pot pie, gumbo, casserole, ala king, soup......
#finallyathomas2019
#finallyathomas2019
Tree Cammo...
Sneaking through the shadows
We started our RV adventure January 25th, today the RV crossed the Arizona border, 6253 miles later. What a trip! But now it's time to step back into reality again, the vacation is almost over.
Enjoyed touring Boundary Oak Distillery and tasting some craft spirits...

THE JOYS OF FULL-TIME RV LIFE - Random, moody, and quirky--but always straight from the heart.

Nature knows no such barriers

Not all who wander are lost...

RV Camping in the USA

The highlights, goofs, and minimalist adventures of a solo chick who chose to live full-time in an RV.

An entire year of travel. Where I've been. What I've learned.

Triglide Seniors
My Five Fs
Oh, the Places They Go!

Two retired educators touring the country in their motorhome

Making the most of every mile along the way...

The Lady is a Tramp

Six Saturdays and a Sunday

Work's over, now it's time to play!

Love Your RV!
Russ on the Road

Traveling purposefully towards an as-yet-unknown destination

Stepping out of our comfort zone

Taking our lives on the road

Our travels in our Wildcat Maxx 5th Wheel

...from real estate to wheel estate

Life, Liberty and the Pursuit of RV Happiness

Wandering around Georgia and beyond

Full-timing since April 2015 ... Dave, Kelly, and our dog living and traveling full-time in our Airstream trailer.

jammin' on down the road

and drink plenty of it

Gone With The Wynns
Aluminarium