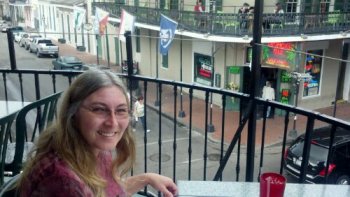 After touring Biloxi and Gulfport, MI, we headed onto New Orleans and took a hop-on, hop-off bus tour. We got off to watch the first day of Christmas parade. We found a great spot at Canal Street just south of Burbon Street so once the parade came by we walked over for lunch on the balcony at Johnny White’s Pub & Grill. On the way we followed one of  the Burbon St wedding parades. I had the Cajun Sampler (red beans/rice, shrimp creole and crawfish etoufee). Alice played it safe with a sandwich.  While we were eating, there was a funeral parade for a young lady who died in a car accident during the Thanksgiving holiday. They went to the Tropical Isle across the street, bringing food typical of an Irish wake. We managed to see a lot on such a short visit, we only missed the craziness that begins after the sun goes down!

This site uses Akismet to reduce spam. Learn how your comment data is processed.

Nature Knows No Such Barriers

Your resource for RV camping in America.

Making the most of every mile along the way...

Six Saturdays and a Sunday

Work's over, now it's time to play!

Love Your RV!
Russ on the Road

Traveling purposefully towards an as-yet-unknown destination

Stepping out of our comfort zone

Our travels in our Wildcat Maxx 5th Wheel

...from real estate to wheel estate

Every Day is a Gift!

jammin' on down the road

and drink plenty of it